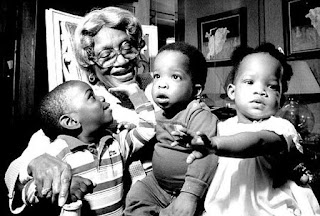 Clara McBride Hale was born on April 1, 1905 in Philadelphia. Hale’s mother had four children and openly assisted the children from the neighborhood and their families. She was mulatto and according to her daughter, could have “passed” for white. Hale’s grandmother had been a slave and she conceived a child fathered by her master; that child was Hale’s mother.

Hale vividly remembered her mother advising her children, “I want you to hold your head up and be proud of yourself. We were brought over and we were enslaved all this time, but it’s over now. You’re supposed to be free, but you aren’t free. Remember that.” Her mother’s love, generosity and understanding of the African-American experience had a profound influence on Hale and the direction her life would eventually take. She had no recollection of her father; he died when she was a baby.

Hale had three children, Nathan, Lorraine and Kenneth, who were very young when their father died. As an African American widow, her employment options were strictly limited to domestic service; she chose to become a foster parent, instead, and to take in other people’s children. Although the initial arrangement with the parents was to care for the children five days out of the week, many of the children didn’t want to go home. As a consequence, she came to an understanding with the parents; they gave her an additional dollar each week and she kept them with her all the time. She raised forty children in this way. All of these children eventually went on to college and graduated; they all ended up with meaningful careers and led successful lives. Hale always encouraged and supported their efforts. As a result, some became singers, dancers, preachers and “…things like that.”

By 1969, at the age of 64, she decided to retire from foster care and, therefore, no longer love and nurture children. That determination would soon change when her daughter sent her the baby of an addict; her name was Amanda. Although she was reluctant, at first, to assume this new responsibility, within two months she had twenty-two babies living in a five room apartment. Hale’s viewpoint can best be described in her own words, “Angels must have him – the baby’s name was Tiny Ty – the night his mother pitched him in the dumpster. It was filled with broken wine bottles and splintered furniture. Yet he fell on the one soft thing in it; a piece of discarded carpet that smelled of wine. Fortunately, only a few mosquitoes and roaches had bothered him…

“It was truly a miracle that he had beaten the odds of dying from exposure those critical first hours of his young life. And now he needed us to help him beat a more determined foe: heroin, his birth companion. The monkey on his back.”

It is important to remember that 1969 was a terrible and ominous time in the nation’s history – Martin Luther King Jr. and Robert Kennedy had been recently assassinated. Robert Kennedy, brother to President John F. Kennedy, was killed in the midst of his primary campaign for the presidency. He was a Democratic, who ran on a platform oriented towards social justice issues and the end of the Vietnam War. His sudden demise along with Martin Luther King Jr. was a serious blow to the equanimity of the entire country and especially to minority populations. To the people of Harlem it was a desperate era in which nascent hope was shattered and at its nadir, horrific riots devastated the region.

In 1973, Mother Hale opened the Hale House and started the Center for the Promotion of Human Potential; it was a brownstone in Harlem with the purpose of providing a safe and nurturing environment for the babies of young drug-addicted mothers. The success of this operation has been spectacular – hundreds of babies have returned to health as a result of their stay in Hale House, which is now administered by her daughter, Dr. Lorraine Hale.

According to Mother Hale, “It’s been over six hundred addicted babies. We hold them and rock them. They love you to tell them how great they are, how good they are. Somehow even at a young age, they understand that. They’re happy and they turn out well.”

Her philosophy may best be summarized in her own words, “Being black does not stop you. You can sit out in the world and say, ‘Well, white people kept me back, and I can’t do this.’ Not so. You can have anything you want if you make up your mind and you want it. You don’t have to crack nobody across the head, don’t have to steal or anything. Don’t have to be smart like the men up high stealing all the money. We’re good people and we try.”

She decided to open up a place for children with AIDS in the 1980s when she was in her mid seventies, knowing that these children were destined for an early death. This was a remarkably courageous act, since knowledge concerning AIDS was incomplete at that time, and the general population greatly feared the disease. The victims of AIDS were often regarded as pariahs. This disease that cripples the immune system had a devastating impact in Harlem, leaving many AIDS-infected children without parents. She hoped that, “… one day there will be no Hale House, that we won’t need anybody to look after these children, that the drugs will be gone. I’m not an American hero. I’m a person that loves children.”

She remained active and involved until her death. Clare McBride Hale died on December 18, 1992; she was a truly remarkable woman. She lived an exemplary life filled with an abundance of love for the human kind. She exhibited an extraordinary kind of courage and a generosity of spirit that is difficult to fathom. The Hale House Center is still extant and continues to serve children as it has done for over forty years.
Posted by Joseph Aprile at 7:55 AM